We have launched a reissue of the José Ramírez I’s “Guitarra de Tablao” based on his template and design, plus upgrading the details of construction, adapting them to current preferences relative to comfort and proportions. We have also toyed a little with the appearance, in all cases in accordance with the trends of the time when it was originally developed.

This model takes after a José Ramírez I’s guitar from 1913 that we keep in our collection, but it can be made with classic assembly as well, because it has the same pattern as the Ramírez guitar which belonged to Agustín Barrios.

All José Ramírez Handcrafted Guitars can be ordered with a thinner neck, which thickness is 1,9 cm to 2,00 cm on the second fret. Please specify this at the time of order.

This guitar can also be built with “cámara”. 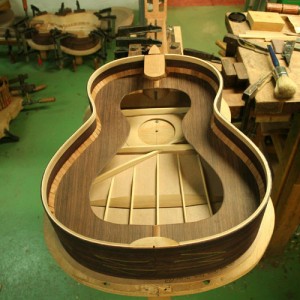 We call “cámara” an interior fan, designed by Ramírez, glued in the middle of the sides. We can build any of our guitars with this fan if the customer orders it specifically.  The fan can be made of Indian rosewood or red cedar or German spruce.  It takes away the “wolf” notes, and it helps the sound to be clear, where the notes are perfectly separated between them.

It is an ideal instrument for Barroque and Renaissance music. Its construction details are the same as the Traditional guitar.